The Return on Investment of Identity Modernization & Migration with Strata

Migrating applications from legacy IdPs to cloud platforms — or from one cloud to another — is a necessary evil for companies needing to modernize, but it is expensive and complicated.

Today’s enterprise computing infrastructures consist of a complex mix of public cloud, private cloud, and SaaS apps. Typically, each of these systems has its own built-in identity and access management (IAM) implementation

Apps require identity (login, SSO, and password management, etc.) which has likely been custom integrated on older identity systems. Customization leads to pervasive lock-in between the apps, the legacy IdPs, and the platforms/vendors the apps run on. Lock-in forces millions of dollars in IT spend — managing, upgrading, and maintaining legacy identity infrastructures.

Additionally, organizations increasingly have multiple public clouds (AWS, GCP, or Microsoft Azure to name the big players), which leads to new identity silos that must also be managed. Migrating apps from legacy IdPs to cloud platforms requires the associated identity infrastructure to migrate as well.

Traditional approaches to identity migration and modernization require recoding all legacy apps to be able to work in the cloud. It is an expensive process and it takes a long time (around 12 to 24 months). Often, the ability to custom code/refactor each app, the expertise of the IAM infrastructure, and the knowledge of how the apps are integrated simply isn’t available.

Our software is built for the distributed approach to migrating and modernizing identity for multi-cloud and hybrid environments that eliminates the need to custom code each app. Maverics easily enables organizations to migrate to the cloud, use multiple clouds, and supports hybrid deployments.

Maverics is the only Identity Orchestration solution that uses a distributed, multi-cloud-native architecture. With Maverics, organizations have realized an ROI of 556%, saved more than one million dollars (US) in hard costs, and completed migrations in weeks instead of months — 85% less time than traditional manual efforts.

In addition to the monetary savings, organizations realize the benefits of increased agility, improved security, and future-proofing with Strata’s Maverics Identity Orchestration solution.

Migration to a new identity system is difficult. It requires rewriting each legacy app to work with the new technology of the cloud identity platform, which can be expensive, time-consuming, and labor-intensive.

The average enterprise has:

With Strata, organizations can realize:

An organization modernizing its identity infrastructure and migrating 10 apps can save $1,450,000 in hard costs and 96 weeks of dev effort by eliminating costs to rewrite apps, perform manual discovery, maintain legacy IAM, code, and compute infrastructure.

This paper summarizes the field and primary research conducted in conversations with those leaders. These organizations are concentrated in regulated industries subject to compliance including financial services, insurance, healthcare, and global technology enterprises.

The report outlines key takeaways from our interviews that can help you better prepare for multi-cloud and streamline your migration to the cloud. A few important points about our analysis of the interviewed companies:

Our discussions with the organizations interviewed for this report identified the many challenges they face when trying to move their businesses to the cloud, while straddling their extensive existing on-prem infrastructure.

These interviews revealed classic examples of people, processes, and technology all being impacted by antiquated identity deployments. Here are their top challenges:

Each new cloud platform creates another silo of identities. This can be quite challenging for network and security administrators. There is a lack of visibility with no single pane-of-glass for managing identities, access, and policies.

Applications are locked into older identity systems such as CA SiteMinder or Oracle Access Manager. Decoupling from these identity solutions requires that an application be refactored to use a different identity system.

Legacy applications may be five or more years old and the people who wrote them are no longer with the company. The individual who integrated the identities with the application are also gone. Finding talent to address these challenges is scarce and expensive.

The following tables (3-5) identify the types of infrastructures, on-prem identity, and cloud identities in use at the companies interviewed for this study. These organizations typically have at least 50 on-prem apps and they’ve only migrated 10% of them to the cloud. The results are an indicator that many companies are still early in their cloud migration journey.

TABLE 1 Infrastructure, identity systems and apps in use

We asked the leaders in our study if they felt their legacy identity systems were adequate for today’s challenges and which use cases are not being met with first generation identity software. They shared six main limitations:

Our research also highlighted that recent public health and corporate mandates to work from home have accelerated the need to move apps to the cloud and provide secure access to previously hard-to-access apps that reside behind firewalls. Moving an app to the cloud usually requires replacing a legacy identity system with a modern cloud identity system.

Additionally, moving an app to the cloud must be seamless to end-users to avoid any confusion (or the introduction of phishing and other security concerns) into the login process.

Companies may have dozens (sometimes hundreds or thousands) of apps that must be analyzed to understand how they need to be migrated to the cloud. Compounding this problem is keeping up with the scale and change that happens across any organization. Understanding dependencies between apps and identities requires detailed analysis and a deep understanding of how the infrastructure works, which can take months and it’s a continually changing picture.

Perhaps the biggest challenge these companies face when moving apps to the cloud is addressing the fact that their apps are locked into the on-premises world because of the way the apps and identity were originally integrated.

These organizations are representative of many who have spent the last 10-15 years integrating their on-prem apps with identity from legacy providers like CA SiteMinder and Oracle (e.g. customer identity profile and login process through custom code, using cookie-based sessions). Migration to a new identity system requires refactoring the app to work with the new session technology of the cloud identity platform. This is not a simple or inexpensive proposition.

Refactoring is expensive in both developer time and dollars and must be done for each app that is to be migrated to the cloud. Organizations that Strata interviewed reported a range of complexity for how complex this integration is, ranging from simple standards-based apps that use SAML or OIDC to complex apps that use the proprietary cookie sessions popular with first generation web access management (WAM) platforms like OAM or SiteMinder. Additionally, migrations and upgrades have required significant investments in time, usually 12-24 months for a typical identity system migration.

FIGURE 1 Migrating to a new identity system requires rewriting the apps to accept the new form of SSO. And, identity data and policies must be translated from old to new.

Companies need to become more agile and are looking for ways to improve their development processes. This means that manual migration approaches must give way to automated approaches. It also means that developers, who are often pressed for bandwidth, are better utilized to work on leading edge projects rather than trying to retain and get them excited about a legacy identity migration project. A developers’ time is better spent on innovation and building new customer experiences and digital products than doing tedious migration work.

Migrating an app to a new identity solution is a very tedious process. First, it can take months to analyze dozens (or possibly hundreds) of apps. Refactoring an app to work with a new identity system requires additional months to rewrite and test the apps. Any infrastructure modernization project is complex, driving the need for comprehensive skills in project and program management.

While cookie-based sessions are the most common and most difficult to recode, even apps that support standards — like SAML or OIDC — require time and effort to refactor, retest, and deploy.

The bottom line is that manual approaches are very expensive:

Our study identified the most common ways that apps and identities are integrated as displayed in the following table.

Our respondents provided a “wish list” for solution characteristics that deal with the challenges associated with managing legacy identity systems. This list includes the following modernization and migration requirements:

Looking at other characteristics of a powerful and flexible identity migration solution, the surveyed companies believe that the following benefits are necessary when considering this type of solution.

Our subjects stated the following results were the most desired in an identity modernization solution:

The Maverics Identity Orchestration platform for multi-cloud by Strata 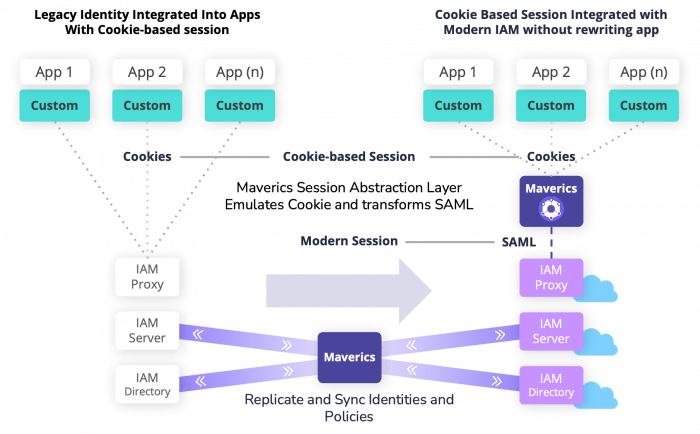 Using Strata’s software, organizations see significant ROI both immediately and ongoing. A detailed analysis of an identity migration experience is found in the following section.

“Without Strata, Kroger could have been spending hundreds of thousands of hours redeveloping applications.”

Using software to automate the migration and modernization of identity greatly improves a business’ hard-cost savings, return on investment (ROI), and ability to add new, modern security capabilities. The following is based on a scenario of 10 apps being migrated.

As shown in the above table, organizations that move from legacy to modern cloud identity systems can realize significant hard-cost savings.

Additionally, these organizations saved considerable time performing migrations and modernization initiatives as shown here. Ranges above account for the number of environments and legacy app complexity.

Interviews revealed a strong ROI* is realized from investing in migration and modernization automation software.

Figure 3 below shows the potential cost savings when using identity modernization software instead of rewriting apps. The graph also illustrates the before and after cost savings that can be achieved from not having to rewrite/refactor apps. 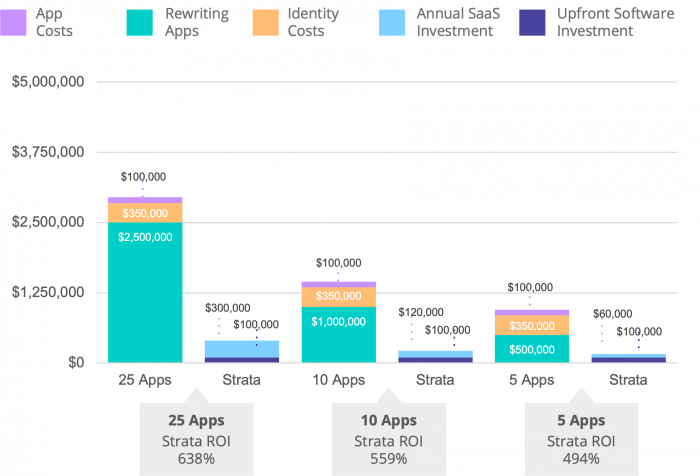 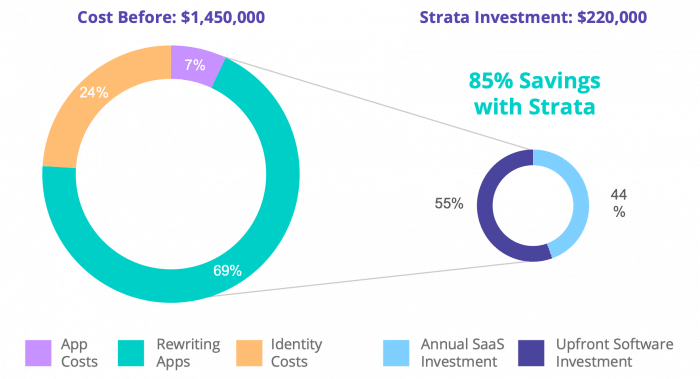 In addition to the quantitative benefits of using Strata’s Maverics Platform, there are qualitative considerations that should not be overlooked. These include:

*ROI varies based on the number of apps migrated and the costs associated with rewriting each app.

We have learned through this study that companies are reaching a breaking point in how they manage security and identities across cloud and on-prem applications. The tired, manual approaches to identity migration and management cannot continue because of the time, cost and security concerns associated with this approach. It is simply unsustainable.

The time required to analyze and understand each app that needs migration from a legacy identity system is significant. Once an analysis is completed, IT and development resources must be allocated for multiple weeks to rewrite an application’s security and identity functions. These two core migration use cases require significant budget and time, driving classic identity migrations to be complex and expensive multi-year endeavors.

There is an alternative — using specially engineered software to abstract and integrate multiple identity systems using Identity Orchestration. This approach, created by Strata, is a breakthrough technology that automates manual tasks — such as discovery and migration — while eliminating the need to rewrite/refactor apps during migration.

Contact your Strata representative today to learn more about how you can get started with your identity modernization and migration journey. strata.io/demo App & Identity Migration
SiteMinder’s End of Service (EOS) Is Coming Quickly. What Are Your Options?